Both Sarah Mkhonza (Swaziland), ICOA’s resident writer from 2006-08, and Irakli Kakabadze (Republic of Georgia), our resident writer from 2008-2011, participated in the December 8 book launch for Far From Home,  an anthology of poetry by some of Ithaca’s resident immigrants from several countries.  Tompkins County Poet Laureate Gail Holst-Warhaft produced the anthology, with assistance from Ithaca City of Asylum, to commemorate a reading co-sponsored in May 2011, during Ithaca’s Spring Writes festival.

The theme of the December evening was reflected in the anthology’s title.  Sarah read a poem about America, “America, I Saw You,” written by ICOA co-founder Bridget Meeds. Sarah then read a second poem of her own, “Swaziland, I Witnessed You,” responding to Bridget’s poem.  Irakli read a new prose piece of his own that reflected on the condition of being in exile.  The new anthology and a variety of chapbooks by the writers sponsored by ICOA are for sale at Buffalo Street Books. 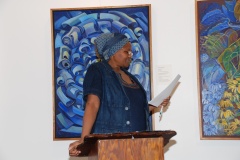