Posted on August 8, 2019 by ithacacityofasylum

Cartoonist Pedro X. Molina has been called “one of Nicaragua’s sharpest observers.” Photo by Jonathan Miller/ICOA.

Pedro X. Molina, an internationally acclaimed political cartoonist who fled his native Nicaragua during a violent crackdown on journalists and government critics, has been named ICOA’s seventh resident artist.

Pedro and his family left in a rush on Christmas Day 2018 after police killed a journalist, jailed two others, and ransacked the offices of his newspaper, Confidencial. ICOA covered their airfare and has provided financial and logistical support since they arrived. We also acted as a bridge to Ithaca College, where Pedro will work as a Visiting International Scholar in Residence in the Honors Program.

In addition to teaching, he will take part in local exhibitions and events, travel for fellowships and speaking engagements, and continue to contribute cartoons to Nicaraguan and international outlets.

Please join us in welcoming the Molina family at our annual “Voices of Freedom” fundraising event on Friday, October 4 at 8 p.m. at the Community School of Music and Arts in Ithaca. Pedro will make a presentation about cartooning and then we will celebrate with a Latin-themed party with food and music. The event is free and open to the public. 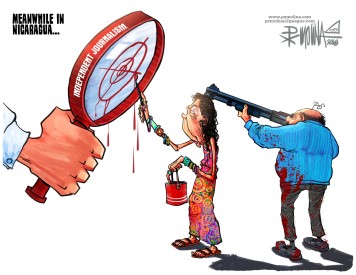 Pedro is the first cartoonist we have hosted since our founding in 2001 and our first resident from Latin America.

He has been published in the Washington Post, Los Angeles Times, Chicago Tribune, Courrier International (France), and many other publications, and has been widely recognized for his artistic ability and his political commentary.

This summer, he won a prestigious Maria Moors Cabot Award from Columbia Journalism School for “career excellence and coverage of the Western Hemisphere that furthers inter-American understanding.”

The awards committee called him “one of Nicaragua’s sharpest observers” and wrote that “Molina uses his pen and wit to take aim not only at the repressive government of President Daniel Ortega, but also at human rights abuses throughout the Americas and the world.”

In 2018, he won the Courage in Editorial Cartooning Award from Cartoonists Rights Network International and an Excellence in Journalism award from the Inter American Press Association.

Many of his cartoons target Ortega and his wife, vice president Rosario Murillo. Ortega was a popular revolutionary leader when he and a group of fellow commanders first took power in 1979. He served as president from 1985 to 1990, then returned to office in 2007. Since then, he has consolidated his hold on power and rewritten the constitution to allow him to remain indefinitely.

The human rights situation worsened after street protests in April 2018, as the government cracked down on dissent, killing more than 300 and jailing hundreds more. Human Rights Watch noted “a pattern of systematic abuse against anti-government protesters and opponents,” including assassination, rape, and torture. More than 50 journalists have gone into exile.

The Norway-based International Cities of Refuge Network (ICORN) alerted ICOA about Pedro’s situation and we quickly agreed to take him in.