10-year Anniversary of Defending the Freedom to Write

In celebration of 10 years of providing a safe haven to oppressed writers, Ithaca City of Asylum (ICOA) sponsored a marathon reading, Voices of Freedom, featuring many of the community’s talented authors. This was a unique opportunity to hear local authors—including Cornell faculty James M. McConkey, Alison Lurie, Helena Maria Viramontes, and Ernesto Quiñonez, —read from their own works, in celebration of the right of free speech and in support of ICOA’s work. The reading took place on Saturday, November 6, 2010, from 1–4 pm at the new Kitchen Theatre Company, 417 W. State / Martin Luther King Jr. St., in downtown Ithaca. 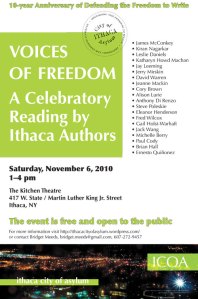 Ithaca City of Asylum, which began in early 2001, is one of only four cities in the United States providing asylum for writers. In its 10-year history, ICOA has provided a safe place to live and work for four international writers and their families. In the face of political repression, these writers have spoken up for freedom of expression in their own countries and continue to do so within Ithaca’s supportive and creative community.

ICOA’s guests have included Yi Ping, a poet from China; Reza Daneshvar, a playwright and novelist from Iran; Sarah Mkhonza, a fiction writer and linguist from Swaziland; and, most recently, Irakli Kakabadze, a poet, playwright, and journalist from the Republic of Georgia. All have done significant creative work while living in Ithaca, published chapbooks with the assistance of ICOA, taught at local schools, and contributed to the community’s cultural life by participating in various literary, scholarly, and political events. Reflecting their appreciation of the life they’ve been able to build here, three of four hosted writers still happily reside and work in Ithaca.

Celebrate the Freedom to Read with a spirited and inspiring presentation and performance by Cornell University Writer in Residence and Visiting Professor Irakli Kakabadze.

Kakabadze, a writer, peace studies scholar and activist, and his wife, Anna Dolidze, now a research fellow at Cornell Law School, fled the Republic of Georgia in 2006 after he was beaten, arrested and had his life threatened for protesting repressive government actions. The two are the subject of the documentary film ‘At the Top of My Voice.’ He lives in Ithaca as part of the Ithaca City of Asylum Writers Project.

Kakabadze will discuss the persecution he endured in Russia and share his poetry and writings.

This program is free and open to the public.

During his residency, Irakli Kakabadze has led a seminar in the Cornell University Peace Studies Program teaching students to use literature to create positive solutions for society. In one such class, the students took Kakabadze’s tragedy, Candidate Jokola (which has been suppressed in Georgia) and used conflict resolution strategies to change the outcome of the play and address the political and ethnic issues currently facing Georgia. Recently, Georgia’s Minister of Reintegration saw these performances on the Internet and incorporated student suggestions into new proposals for reconciliation in the region.

On April 7, “Acting Locally: Building Peace Through Creative Arts,” will be held at Cornell University to celebrate Kakabadze’s work in Ithaca, particularly his efforts to engage students in political issues through creative arts. The event will be held at 4:30 in Kaufmann Auditorium, Goldwin Smith Hall at Cornell.

At the event, student members of Kakabadze’s seminar, “Peace-Building and Creative Arts.” will discuss their experiences working with Kakabadze. An excerpt from Kakabadze’s play, Candidate Jokola, will be performed by J.G. Hertzler, Michael Kaplan, Rockwell Shah, and Akilah Terry, and directed by Beth Milles, all of Cornell. The performance will be followed by a screening of Christian Madera’s film, Rethinking Tragedy: Creative Solutions to Conflict in the Caucasus, which depicts the student performances in Kakabadze’s class. A dialogue on the role of art to effect social change will follow the film.

“Art is a good way to overcome conflicts by using creative thinking to communicate,” says Kakabadze. In 2003, Kakabadze co-founded the Georgian Theatre for Change, which transformed the monologue of a theatrical performance into a dialogue between audience and stage. The theatre was part of the movement that led to the Rose Revolution, a bloodless uprising that led to the resignation of President Eduard Shevardnadze and the call for new national elections. Fearing for his safety and that of his family because of his writings and activism, Kakabadze sought refuge with the International Cities of Refuge Network, which referred him to ICOA, an organization that provides sanctuary to writers whose works are suppressed and whose lives are threatened.

“Peace is a dangerous idea to some people,” says Kakabadze. A documentary about his ongoing struggle for human rights in Georgia, At the Top of My Voice, was released in 2009.

“Irakli feels that it’s really important to talk about the power of artists as activists and the artists’ contributions to peace-making,” said Travis Winter, a board member of ICOA. “It’s all about getting different perspectives. He wants to emphasize the multiple contributions of people who wouldn’t have been part of the discussion had there been only one voice.”

Posted on January 8, 2010 by kennyberkowitz

Posted on January 8, 2010 by kennyberkowitz

ICOA has been selected to participate in this year’s Alternative Gift Fair, an annual event that offers Ithacans a wide array of holiday presents in the form of charitable donations. The Alternative Gift Fair showcases over 55 organizations, with gifts beginning at $5. Each gift you buy comes with a free greeting card and with an insert about the organization being supported.

Gifts available in support of ICOA are as follows: 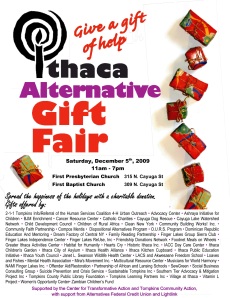 If you’re unable to join us at the Fair, please be aware that after December 5th, gifts can be purchased online at http://www.ithacaaltgiftfair.org. A downloadable gift card insert will accompany your online purchase.

We look forward to sharing the holidays with you!

Irakli Kakabadze to Perform September 26th, 2009 at “Voices of Freedom”

“Voices of Freedom” is the annual highlight of community events planned by Ithaca City of Asylum. 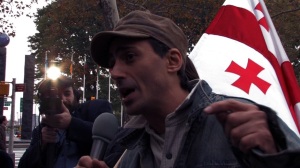 Russia’s attack on the Republic of Georgia, the tiny Eastern European country to its east, grabbed headlines this August of 2008. But Georgia’s biggest enemy is the idea that war is the solution to the territorial conflict—or any conflict—says Irakli Kakabadze, a Georgian writer, poet, and playwright who fled his native country in 2007, when his life was threatened as the result of his writing and activism. “Peace is a dangerous idea to some people,” he observes. Kakabadze will give a free public reading of his work at this year’s Voices of Freedom event, scheduled for 3:00 p.m., Saturday, September 26th, at the Unitarian Church of Ithaca.

Every year, Voices of Freedom celebrates Banned Books Week. The event is sponsored by Ithaca City of Asylum (ICOA), a nonprofit organization that supports writers whose lives have been threatened and whose works have been suppressed. The group’s efforts are essential as long as “there are places in this world where, if you honestly put pen to paper, someone will put a gun to your head,” says novelist and former Cornell professor of creative writing Lamar Herrin, an ICOA board member.

In addition to Kakabadze’s reading, this year’s program writer Ernesto Quinonez will facilitate a discussion with Kakabadze focusing on “the artist as activist.” Kakabadze will discuss the importance of art, and writing, as a tool for community and peace building. END_OF_DOCUMENT_TOKEN_TO_BE_REPLACED

“Peace is a dangerous idea to some people,” says Irakli Kakabadze, a writer, poet and playwright from the Republic of Georgia who fled his native country in late 2006 with his pregnant wife when his life was threatened because of his writing, antiwar and human rights activism.

Kakabadze and his wife, Anna Dolidze, are the subject of a new documentary, “At the Top of My Voice,” by Larry Kamerman and A.V. Sudhir that had its regional premier at Ithaca’s Fall Creek Pictures April 5 as part of the 2009 Finger Lakes Environmental Film Festival (FLEFF). Kamerman has worked with such film luminaries as Martin Scorsese and Steven Soderbergh.  Another screening of this film is planned in the early fall 2009 by Cornell University Cinema.

You can view clips of the movie at the film’s website.